Are they watching from the roads of gold...every breath we take?

The NSA and other three initial origination's power explode in the novel "C Street." From the US to Tel Aviv and on... are you watched, listened to and ...controlled by those who walk on roads of gold?

"Before there was the public internet there was the internet's forerunner ARPAnet or Advanced Research Projects Agency Networks. ARPAnet was funded by the United States. This is the basis for my fiction novel, "C Street."
Ravished with mixed emotions... sheer laughter and horror rolls through the pages of this book. "C Street" and the men who believe they are God's is inspired by the authors intense relationship with a deceased government lawyer, a bipolar genius. Tales from the dark side of governments became the fodder for this fiction of technological advances, exotic destinations and sensual power players. 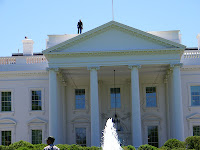