... Blurred lines and secret lives shined, opulent in the darkness, magnificently hidden within New York's 1950's sexually free Greenwich Village. Fifteen years earlier, Europeans were freed from the gates of hell. Freedom it was, "Rossanos" we were, for many knew not our own names. Read more or or just search L'Affaire Rossano on Amazon worldwide. 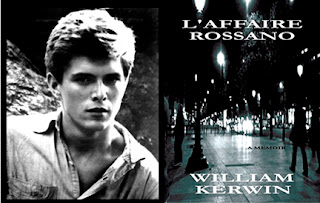 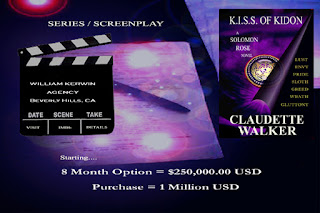 ... Now, let’s talk about K.I.S.S. OF KIDON, “Is he ours?” It’s an international drama/thriller full of action and dark humor.

In a world cloaked with lies, deception is Solomon Rose’s prowess. His fight started as a child in the bomb-riddled desert and ended in Paris, but his presumed death was not enough. He’s armed for revenge and accompanied by his creation EINSTEIN, an AI supercomputer buried beneath the windmills of the Mohave Desert. Solomon’s brain is about to be connected to Einstein through the earth’s magnetic field by liquid nanotechnology. His DNA has been matched to the AI computer using a magnetic barium compound discovered in the paint of the Chinese …
All governments are asking the same question – is he ours?

We meet SOLOMON ROSE in a modern Russian uniform with an escaping prisoner, a scientist named DIETMAR SLUSSER. However, the course of Solomon’s life began 32 years earlier. A group of four men took three siblings orphaned by the Israeli war. At age five, six, and seven the children began their training to kill, facilitate within governments, and take control over the beginning of the technological era. They are the children of the physicist Turing Hague from the Manhattan project. Twelve years later, on a picturesque morning at the Mediterranean Sea, a group of four men walk, arguing over millions of dollars and the sibling project coming to America. They are MI6, Mossad, Ba'athist and CIA. (Think Dick Cheney, G. Gordon Liddy, Saddam Hussain, and Richard Tomlinson types at the beginning of a power trip conspiracy plan.)

We have to look twice to recognize Solomon as we next see him in a Speedo bathing suit covered in suntan oil while walking on the Florida shoreline. Behind him in a convertible is the lovely JACQUELINE ROSE, anxiously trying to persuade him to get in the car because he has to catch a plane. Behind rocks lining the beach are sweating hit men who wait for a signed order from the CIA. Solomon is irritated by repeatedly being asked to get into the car; he could care less about the men behind the rocks.

A hearing in New York City is awaiting his arrival. Solomon is followed by men in black as he enters, but then he disappears under their noses. The NSA, CIA, MI6, and MOSSAD are all looking for him. Few believe it when he too conveniently “dies”... This begins SOLOMON’s exit from K.I.S.S. - Kidon Integrated Special Services.

Today, the “dead” Solomon is living in a facility built by his brother MEIER FINCH, who Solomon calls WATCHMAN, in preparation for their exit from KISS. Solomon has one more mission and he’ll use Einstein to save them all. There are a few problems – men in black from many governments are in Paris looking for Solomon and he can’t be moved. Jacqueline is on her own with evidence of treason and black ops funds, believing Solomon is dead. She is trained by Mossad and is an uncontrollable force in his plan. Many must die and some will be saved. Will Solomon’s plan work? Einstein gives it a sixty-seven percent chance of success.

Jacqueline Rose has a different perspective. There are too many unanswered questions. The CIA, NSA, and MI6 follow her every move. She’s in love with a man whose papers read, “Deadly Manic Genius – may need some TLC.” What could go wrong?

*** Lead actors - ages can vary by adding or skipping a generation from the genesis. Ethnicity and nationalities are already varied within the story and incentive friendly world wide locations.